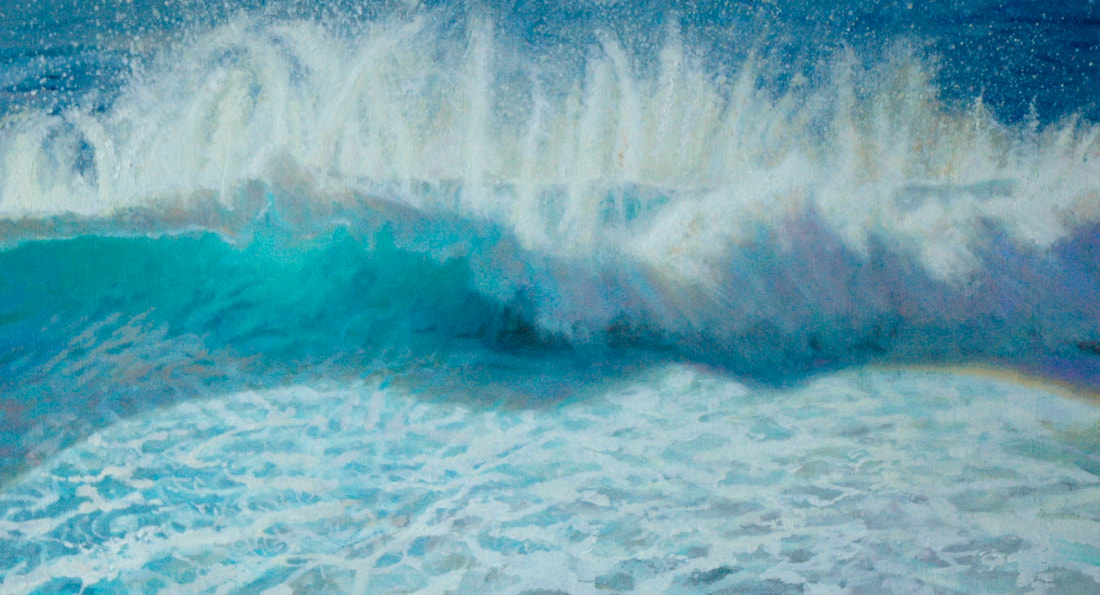 HAVING LIVED AND PAINTED AT THE OLD CHAPEL FOR 35 YEARS, WE ARE (HOPEFULLY!) MOVING TO A SEASIDE STUDIO IN CORNWALL, TO BEGIN A NEW CHAPTER IN OUR LIVES, NEAR OUR DAUGHTER  AND GRAND-CHILDREN.


WE WOULD LIKE TO THANK ALL OUR VISITORS AND LOYAL SUPPORTERS OVER THE PAST YEARS. WE HOPE YOU'LL VISIT US IN CORNWALL.
​ 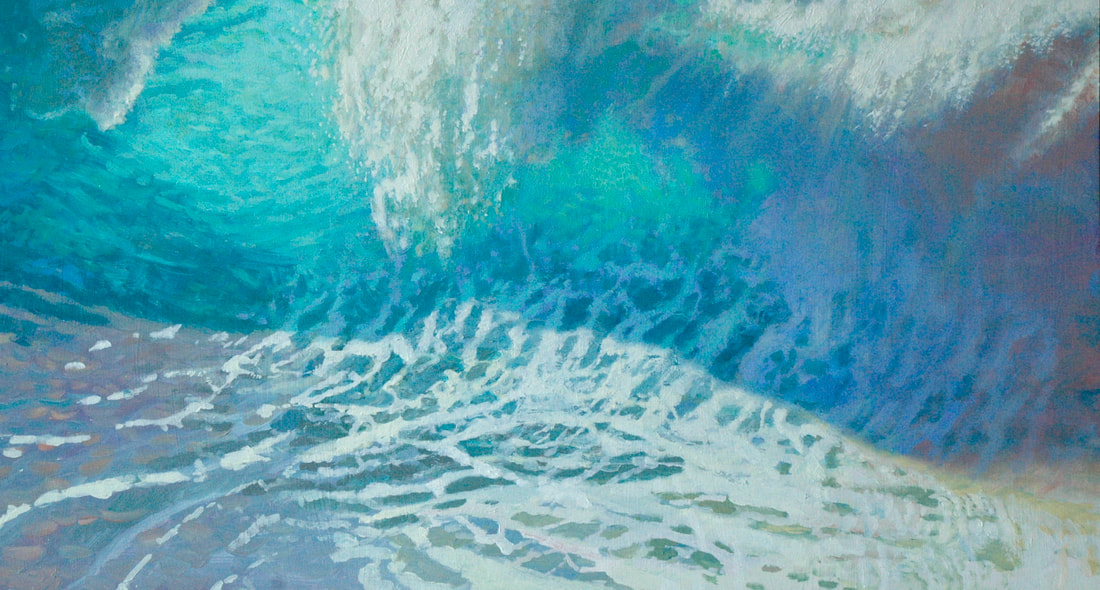 'DRAWING OUT THE DREAMING' - FILMS

FIONA'S BEAUTIFUL, INFORMATIVE FILMS ON ART, OUR GARDEN AND HERBALISM
ARE ON YOU TUBE:
EACH MONTH FROM MAY TO NOVEMBER -  AVAILABLE TO VIEW
LINK:youtube.com/channel/UC2-nLdFwmbD905AVgitnozQ 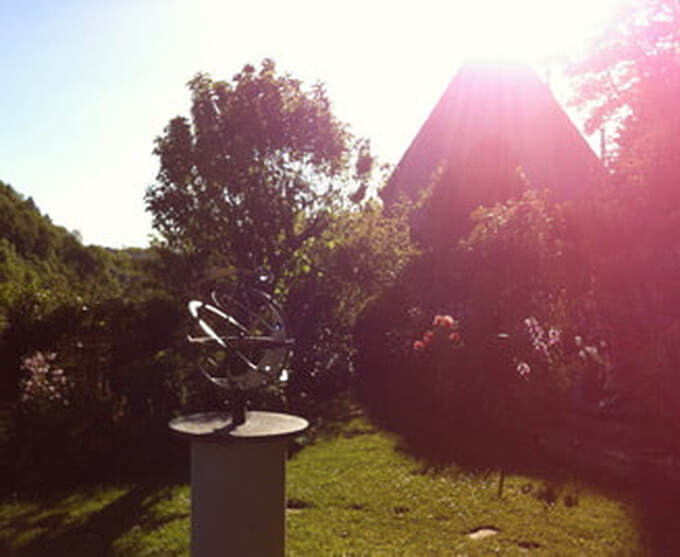 John & Fiona Owen have lived and worked at the Old Chapel in the 'Golden Valley' near Stroud for over thirty-five years. It is where they brought up two children who are also artists now. Every year they have had the task of preparing the studio for the annual exhibition entails much effort (including a feather duster and paint brush on a thirty foot pole! ).  Up until two year's ago  the garden was opened for charity (over £17,000 raised); it drew a great deal of interest and was featured on TV and magazines worldwide. During the summer months the Owens toured Europe with their children and sketch-books, until they settled on a small, more permanent place in le Marche Italy, where they have a tiny studio under a fig tree. 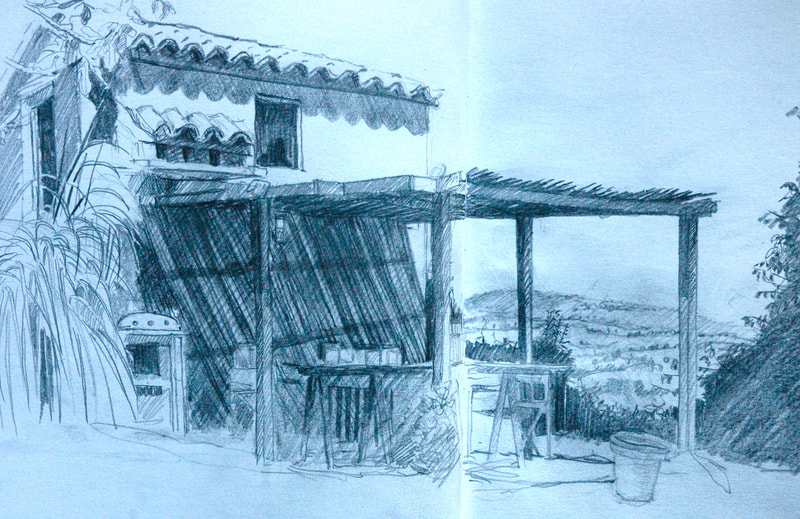 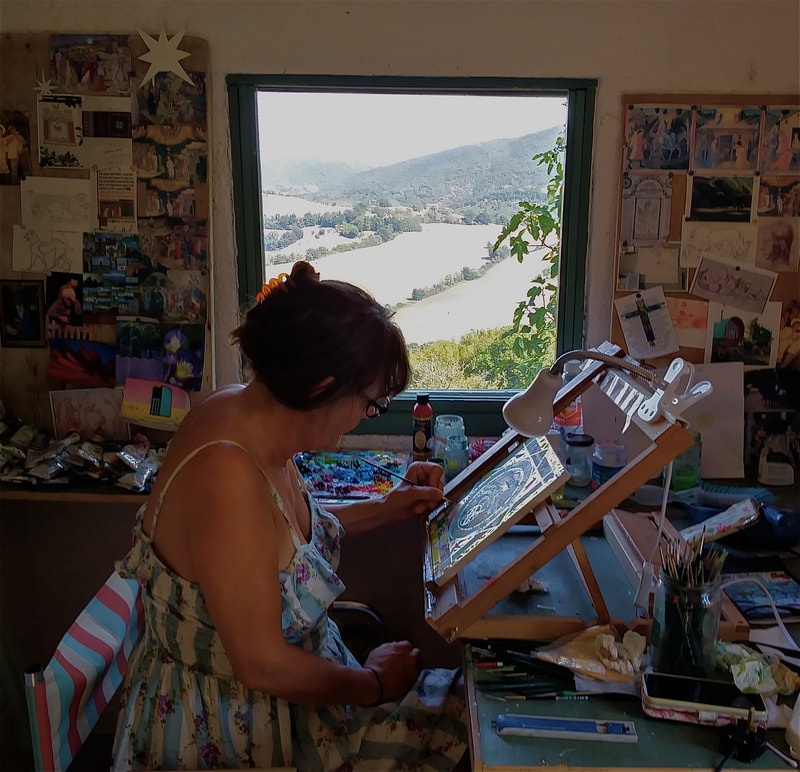 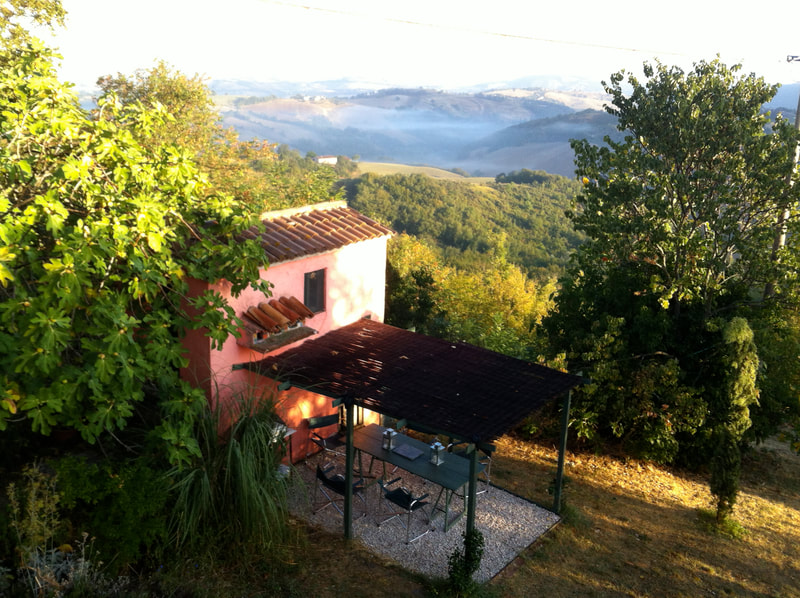 2022 is the twenty-second anniversary of the completion of the wall painting on the east wall of the Chapel. It took two years to paint and John worked on the principle that if friends appeared in those years their portraits were painted on the wall. The painting depicts friends and neighbours surrounding the Chapel and garden for the Midsummer Millennium exhibition. It was influenced by Benozzo Gozzoli's fresco at the Medici Ricardi, Magi Chapel in Florence. 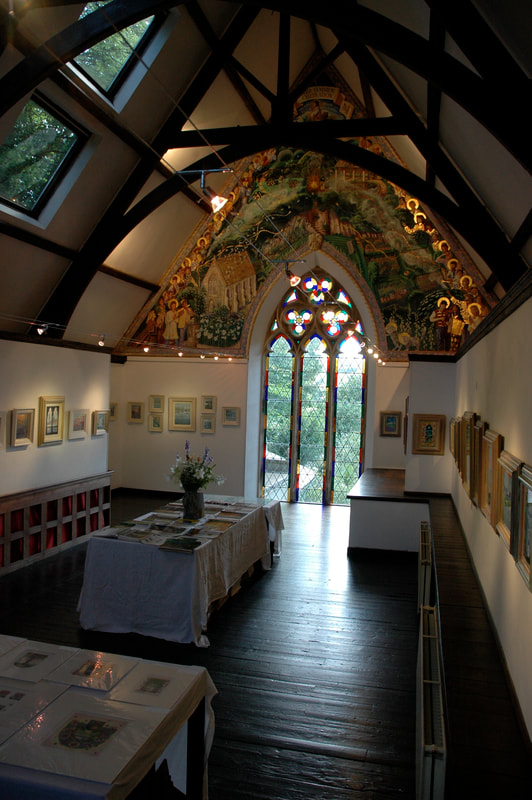 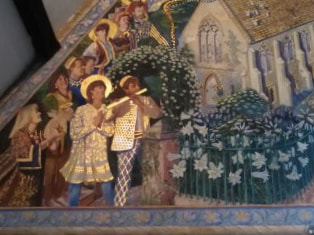 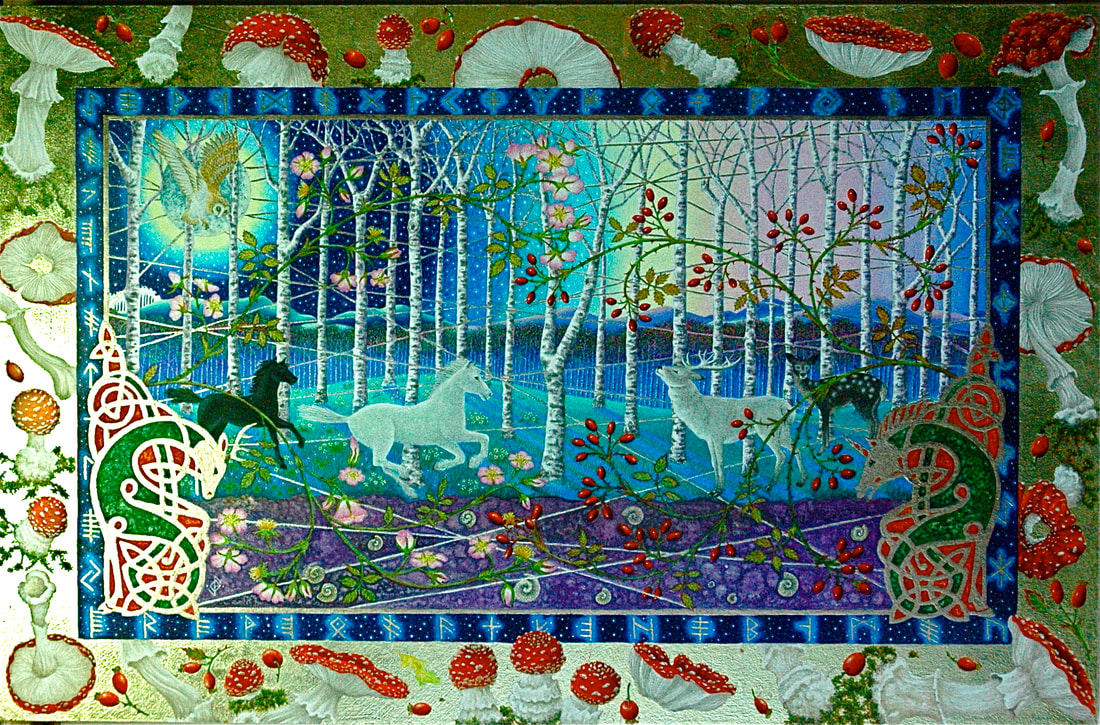 Fiona paints in oil on fine gessoed panels and gilds her work with 24ct. English gold leaf in the tradition of the Medieval manuscripts. Inspiration for her extraordinarily intricate,  lyrical paintings is drawn from her native landscape - the flora and fauna, the changing seasons, and her Celtic inheritance. She endeavours to capture the elusive Wild Magic that is the genius loci - the spirit unique to each place. Her paintings are a celebration of and a homage to Nature. She works in the tradition of the Mystic Visionaries, from William Blake, Samuel Palmer, Richard Jeffries, through to Cedric Morris, Kathleen Raine and Robin Tanner, and believes this pattern in painting and writing to be a thread through time, existing metaphysically as a united body of consciousness.
For information about the 'Five Valleys Herbal' go to: www.weedsintheheart.org.uk
Also to see more about Fiona's Herbal Apprentice path go to: www.insightherbalism.org.uk 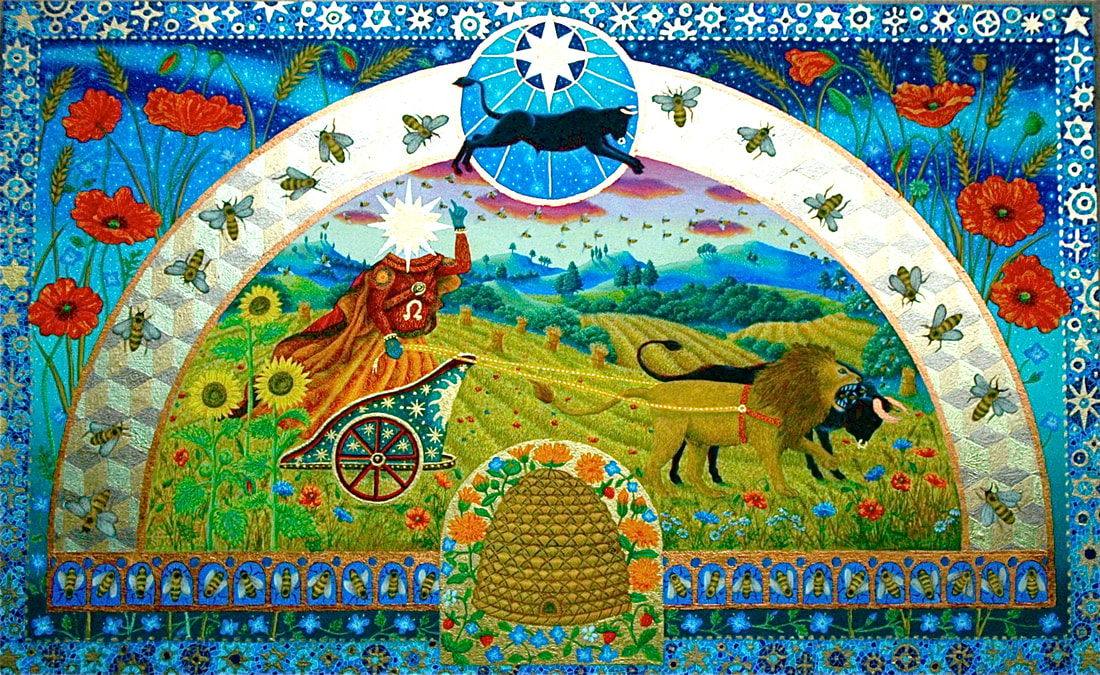 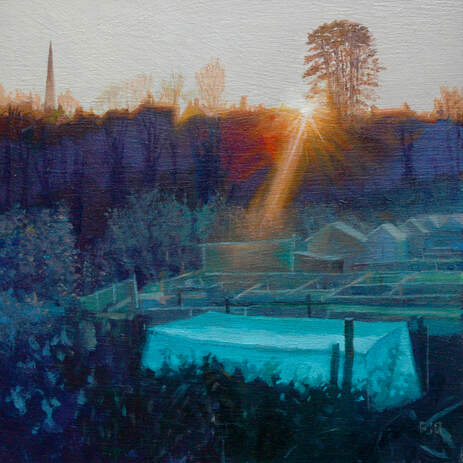 ​Light, air and  transience  infuse John's paintings.  The challenge is to create a sense of  space, depth and atmosphere from paint, transforming an ordinary, everyday scene into an extraordinary moment of vision.  John paints in both oils and water-colours, making detailed sketches from life, wherever his travels take him, then working up his paintings in the studio. The paint is often worked into or scratched, creating a textured finish and another dimension. Igniting  light  in  a  two  dimensional  painting  by manipulating  base  pigment  is  an  alchemy that  has engaged artists through the centuries and is still an aim of painters whether figurative or abstract in style  Portraying  the  landscape  figuratively is  a tradition that has a rich heritage and still resonates.
Paintings of our contemporary landscape can be capable  of  divining  something  deeper than
mere  representation, to  stir  the emotions, to create a modern vision of landscape which is still a
potent part of today's contemporary painting.
​ 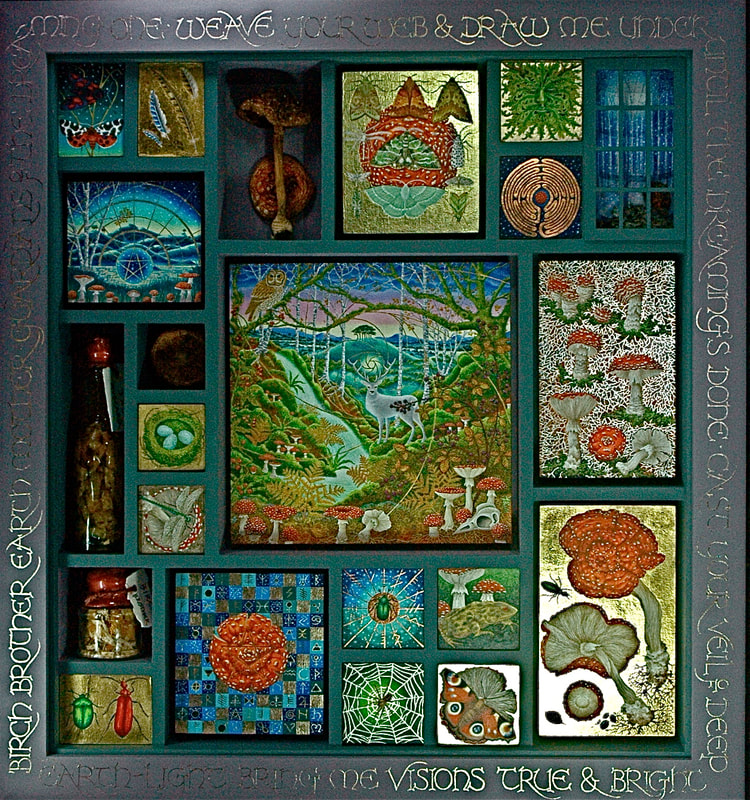 The inspiration for the Amanita Muscaria Plant-Spirit-Medicine cabinet (above) has evolved over many years, initially ignited by studying the behind-the-scenes specimen drawers of the Natural History Museum, whilst a student, then deepened by more than forty years of growing, studying and journeying with plants in my process of Drawing Out the Dreaming. My chosen path as an Awenddion (the Welsh Druid caste who gained insight and inspiration through dreams and visions) focuses my fascination with plant-alchemy, symbolism, plant folk-lore, seer-ship and Magical Herbalism. By portraying  the subject, its medicine and the interconnected web of wild-life associated with it, weaving in myriad layers of potent symbolism, the specific intention of my work is to capture the essence and spirit of the chosen plant/tree/mushroom, in order to honour the deep healing ability of Nature and summon a living invocation of the ancient Green Magic of The Land. I hope to develop this project into an on-going series of Invocation cabinets, each one focusing on a different plant/tree/mushroom.

Having opened the garden for thirty-one years for charity John and Fiona have decided it's time for the garden to retire! It is no longer open to the public;  they are looking forward to enjoying it with friends and family. 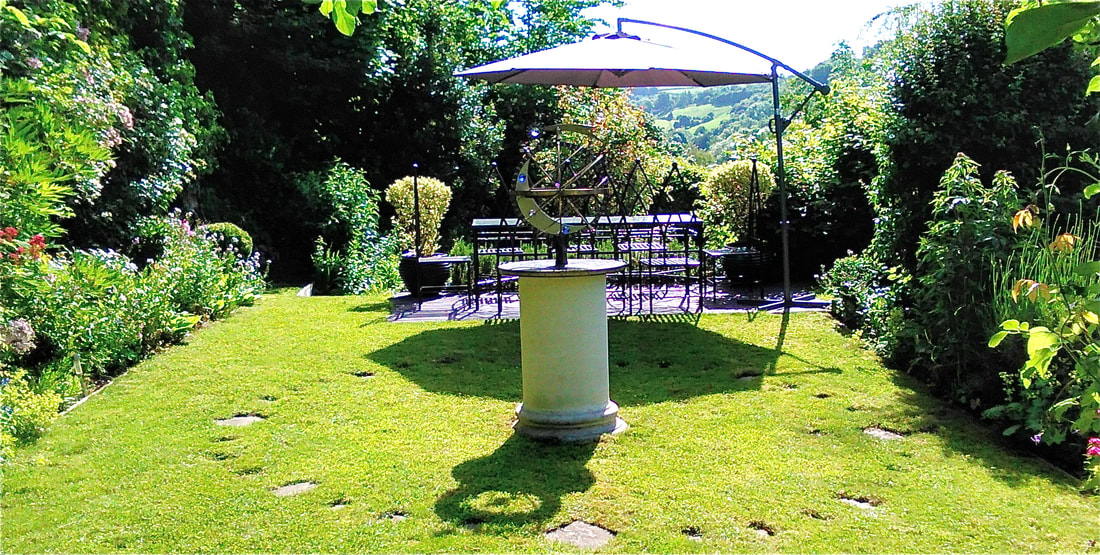 John exhibited at the Royal Academy Summer Exhibition for ten years from 1984.

SEE BOTTOM OF THIS WEBSITE FOR DETAILS OF FREDDIE OWEN - WRITER 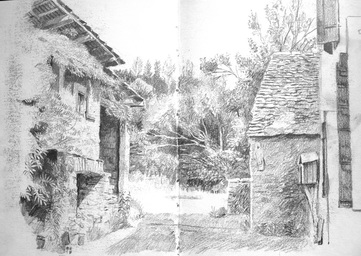 '  W H A T   H O !   G I O T T O '
The long summer visits to Italy, its landscape, people and culture (and vino!) have inspired F. John Owen to start writing under the pen-name Freddie Owen.
"There suddenly seemed to be the time and energy to try a different kind of creative activity and I have found writing very enjoyable and engaging; it's  the culmination of years of ideas and thoughts and 'getting it all down' has proved very cathartic."
There are two books: 'What Ho! Giotto'  is an autobiographical tale of a lifetime of painting and gardens, and the fufillment of a dream by creating a studio and garden in Italy. It has a sketch at the start of each chapter taken from drawing books that were made during his family's travels in Italy. The paperback version now has 20 B/W illustrations going back thirty years to his early paintings. ( above is one of the pencil illustrations)

The second book; 'THE WOODSTOCK TALES'  was inspired by a friend at art school who went to Woodstock Festival in the back of a dark truck; throughout the night they told each other stories and swore to stay together through the weekend event... however when the doors opened, they fell into the 500,000 strong crowd and disappeared. They only knew each other by voice and none of them ever met again. This story is a retelling of Chaucer's Canterbury Tales, but now with a bunch of hippies, a Vietnam veteran, a black Reverend, soft-porn merchant, a woman's libber etc. in a van on the way to the Woodstock festival, 1969.

' What Ho! Giotto' is available as a paperback from www.Lulu.com and both books available from Amazon as both paperbacks and  Kindle ebooks.
GO TO LINK :  http://freddieowen.weebly.com

All text and images copyright © John and Fiona Owen 2009